Querétaro is located at 221 km northeast from the capital of México. With a population of 2,000,000 Querétaro is one of the most important cities in Mèxico.

In recent years it has become a cosmopolitan city with a great diversity of cultures, you can find people from Asia, North América, Europe and Latin America. All of them living in this exciting city of Queretaro. Because of it’s strategic location Querétaro has always been an important city for México.

Querétaro was founded on the 15 of July of 1532 by Spain under the leadership of Fernando de Tapia also well known as Conin, his indigenous name. Before the Spaniard came to this area, the indigenous population belonged to the tribes of Otomi and Tarascos that lived in this land for around 100 years.

With the arrival of the Spaniard came the modernization in all of this area, also the technology that would help to Querétaro to become one of the most rich and important cities of the colonial age. Querétaro was the conection between the north of Mèxico(where the Spaniards brought all the Gold, silver and other precious stones) and central Mèxico, where everything was sent to Spain via the Veracruz port. Querétaro was considered the limit of the civilized territory, that is why they considered it necessary to build temples and churches under different orders like carmelitas discalced, jesuits, franciscan, etc. With these religious orders the best education of that age came to Querétaro, they started to built schools, trace street and building big houses. Querétaro reached it’s splendour between the16th and 18th centuries.

The greatest symbol of Queretaro is without doubt it’s amazing Aqueduct, a marvelous piece of engineering of that time. With its 75 arches This aqueduct helped to bring vital water to the city in 1738. It’s overview offers you a wonderful sight, it is a must see if you come to Queretaro, you will be amazed by it’s impotent high crossing through the city.

Querétaro is famous also for having great museums. Among the most reconized are the “Museum of Art” located in the temple and exconvent of San Agustin considered one of the most beautiful buildings of America between 17 and 18 centuries. Today in the this museum they always display the most beautiful and unique pieces of art. From paintings of recognized artists in Mèxico and international to the most famous sculptures of our modern time. Going out and crossing the street, just two more blocks down you will find another museum of great importance which is the “Regional Museum” located in the temple and exconvent of San Francisco de Asis. Here you can learn the entire history of the state of Queretaro, from the times of the first tribes that inhabited Queretaro to the modern times of Querétaro. Its a amazing and old building. You can not miss it!!!

Music is very important in the culture of Querétaro. The temple of Teresitas harbor the conservatory of music of the city and walking some streets to your right you can find many artists playing their music in the different public squares of downtown Queretaro.

Theater plays are pretty unique in this city, there are among 25 theater plays between Thursday and Sunday. You will have so much fun attending some of them, you will feel as part of their culture. Its such a unique and special experience!!!!

This city has a lot of fun and is full of activities. Every year in the city of Querétaro there are among 30 very

important festivals, including gastronomic exhibitions. Palenques (arena or ring with show of horses), bullfights, cultural expositions and the most important, the anniversary of the city of Querétaro every 15th of July.
Having fun around the city is truly a unique experience, but you can not leave out the beautiful craft market in downtown Querétaro. Walking two blocks from the Jardin Zenea (one of the main public plaza) you will find the carft market we supper-recommend you to visit. Its name is “Centro de Desarrollo Artesanal Indígena” where you will find pretty dolls made by indigenous hands and are the symbol of Querétaro.

Eat!!!! While walking through Querétaro’s streets finding beautiful and unique buildings you will get hungry. Querétaro has pretty unique places that are very original and will satisfy your appetite. In the gastronomy of Querétaro you will find the roots of México culinary. We recommend to eat the dish called “Gordita” which is made with corn dough and mixed with cheese or pork meat and are fried. They can cook it in a comal with oil or without oil and it’s all hand made. After they’re fried they are filled with cooked dish mushroom, chicken beef, etc. You can find businesses that are dedicated to cooking this dish for almost 40 years!!! No doubt you will have fun while you discover the wide gastronomy of Querétaro.

Sleep!!!! Querétaro has a huge variety of accommodations. Many of the hotels in downtown are old houses (haciendas) most from the 17th century, converted into beautiful hotels. Also you can find boutique hotels, hostels, etc. All of them with a great location right in downtown making it easy to explore and eat in Querétaro.

Drinks!!! This is very important too. And Querétaro can show you the best traditional drinks of México like Tequila and Mezcal. The cantinas are the best places to taste this drink. In fact, there is a cantina with a long history in Queretaro with more than 88 years serving Mezcal, Tequila and a special liquor invented by them. The perfect end for your walking tour through this beautiful city.

Querétaro is charming, is an adventure, is delicious, is romantic, is traditional, is exciting, is cultural, and is about people.

Explore Querétaro offers personalized walking tours of Querétaro by a married Mexican/American couple that live in the city and intimately know and love Querétaro. 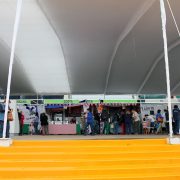 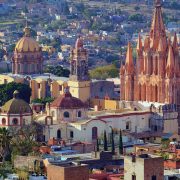 Want to join the discussion?
Feel free to contribute!

Two Mexican Cities on the Friendliest Cities in the World List